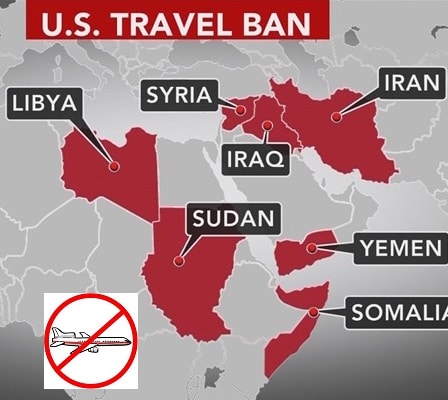 On January 27, 2017, Donald J. Trump, the 45th president of the United States made good on his campaign promise and signed a travel ban executive order into law titled “Protecting the Nation from Foreign Terrorist Entry into the United States.”  Unfortunately, for the president, and the United States, what ensued was mass chaos as people arriving in the United States from one of the travel ban countries were swiftly turned away and returned home, and thousands among thousands of people and lawyers diverged upon airports to protest, offer support, and legal assistance to those being detained at airports.

The rollout of the travel ban has been met swiftly by lawyers for individuals detained at airports throughout the United States.  Lawyers setup makeshift law offices at airports and began filing lawsuits against the President among other federal agencies.  Judges throughout the United States began to immediately enter Court orders staying the legal effect of certain provisions of the executive order, and requiring the government to permit entry to these people detained at airports.  Customs and Border Protection issued a release on its website indicating they are working to comply with all orders entered by Federal Judges.  Customs and border protection indicates that entry of lawful permanent residents is in the national interest, and contrary significant derogatory information indicating a serious threat to public safety and welfare, they will be admitted to the United States.  As of January 30, 2017, Customs and Border protection indicates that based on the travel ban it has:

At Shupe Dhawan we can help you with all your immigration needs from obtaining a visa, a green card, starting a business, and becoming a United States Citizen.  Our team of experienced attorneys have over 20 years of experience and take great pride in the quality litigation and transactional representation we deliver.  You place your trust in us and we make sure that we go the extra mile to get you the best possible result!  Make an appointment for your legal consultation today.

Our Experienced Attorneys Can Also Help You With: