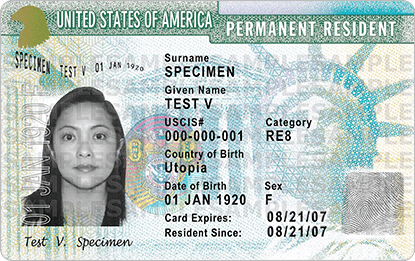 Many people who enter the United States do so on a temporary basis with a visa and must depart after a short trip.  Permanent Resident (Green Card) status allows you to live and work in the United States permanently.  You can purchase property, obtain government loans, start a business, enroll in school, and be employed by virtually any employer in the United States.  The physical card is green, hence the term green card.  Permanent resident status is also one step closer to becoming a United States citizen.

There are Many Advantages to Permanent Resident Status

Differences between a Visa and Permanent Resident Status

There are several differences between a permanent resident card and a visa.  Many people who enter the United States enter with a visa, or as a citizen of a visa-waiver country.  A visa is a temporary document.  With a visa, you request admission at the port of entry.   A visa does not automatically grant you admission into the United States, as many people mistakenly believe.  Even if you have a visa, you can be denied admission when you present yourself at a port of entry and have your visa revoked.  A visa is also for a temporary duration and has an expiration date.  The visa will also carry specific conditions and limitations, not present if you have lawful permanent resident status.

Permanent resident status allows one to live and work permanently in the United States.  However, this is a status which must be renewed every ten years, and that can be taken away.  For example, staying out of the country for more than six months or even committing a crime could subject you to losing this type of status and being deported.

It is a Complex Process to Obtain Permanent Resident Status

At Shupe Dhawan, you can take advantage of the experience of our attorneys.  Our attorneys will help take the confusion out of this complex process.  Please save yourself the heartache and retain one of our professional attorneys to handle the process.